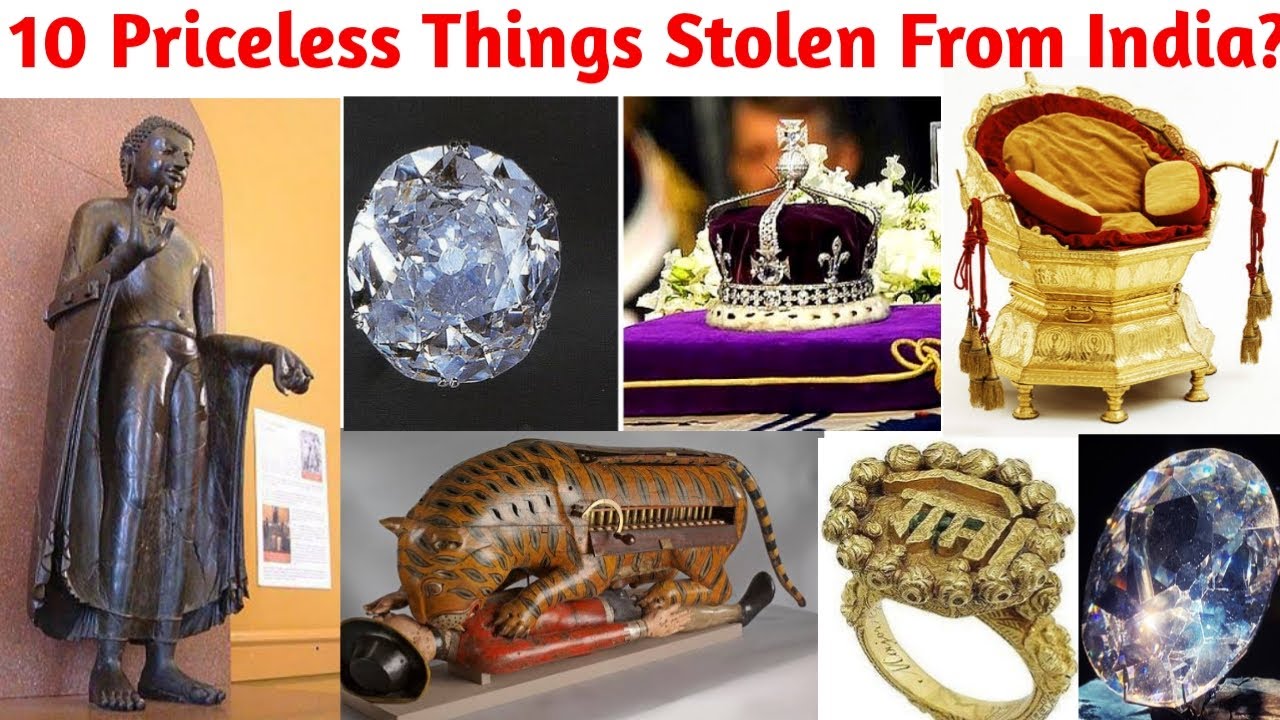 India was earlier known as “Golden Bird”. This is because of its abundant raw materials and precious stones. Not only Kohinoor, there are other things which are stolen from India. Here are 10 valuables that have been stolen from India.

Kohinoor is the largest cut diamond in the world. The origin of this diamond is the Kollur mine which is in a state named Andhra Pradesh. This diamond was 793 carat without cutting. Currently, this diamond is a 105.6 metric carat diamond, weighing 21.6 grams (in its current state). In the year 1850, the diamonds were transferred to the British Reserve and later handed over to Queen Victoria.

The Peacock Throne was a famous jewel throne. It is said to have been the seat of the Mughal emperors who conquered North India. Earlier this throne was in the Red Fort of Delhi. In the 17th century, this throne was specially built by Emperor Shah Jahan.

In the year 1739, this throne was taken away by Nadir Shah, a Persian king.

In the battle with the British, the last king of Mysore lost his life, since then he snatched the sword and Tipu Sultan’s ring. It was later purchased at an auction. 1.57 crores by Vijay Mallya, due to which in the year 2004, Talwar returned to India.

sword Arrived in india But the ring was not. In the Devanagari script, the ring has “Ram” inscribed on it.

The statue of Sultanganj Buddha is about 2 meters long and weighs about 500 kg. This sculpture of Buddha is one of the huge Indian metal sculptures. This statue was found to EBHarris (a British railway engineer) during the construction of the railway in 1862.

The current location of this sculpture is the Birmingham Museum.

A wooden-sized tiger attacking a Caucasian figure, dressed in European clothes. The fascinating thing about this tiger is that there is a limb which is placed inside the tiger. There is a handle on one side. When it is switched on, the organ starts playing. Meanwhile, the lifeless man hops down Howell and his arm.

Not only Kohinoor, The Nassak Diamond has been stolen from India. This diamond was initially found at Trimbakeshwar Temple, Nashik (in the state of Maharashtra). From 1500 to 1817, Heera stayed in the temple.

In 1818, in the Anglo-Maratha War, the British East India Company took this diamond and later gave it to the British jewelers.

The creator of this throne was a Muslim goldsmith named Hafez Muhammad Multani. The Maharaja preferred to sit only on the floor or in a chair, this throne was used for state occasions. The British took this throne in the year 1849, as part of the wealth of the state.

In the year 1657, this cup was made for the Mughal Emperor Shah Jahan. The cup was created with inspiration from Iran, India, China and Europe. The cup was later found at the Albert Museum in Victoria and London.

A special court on Thursday allowed Nirav ModiBrother-in-law of Mayank Mehta will go on a foreign trip. Earlier this month,

Many messages, and some colour, in Naveen Patnaik’s first foreign trip in a decade