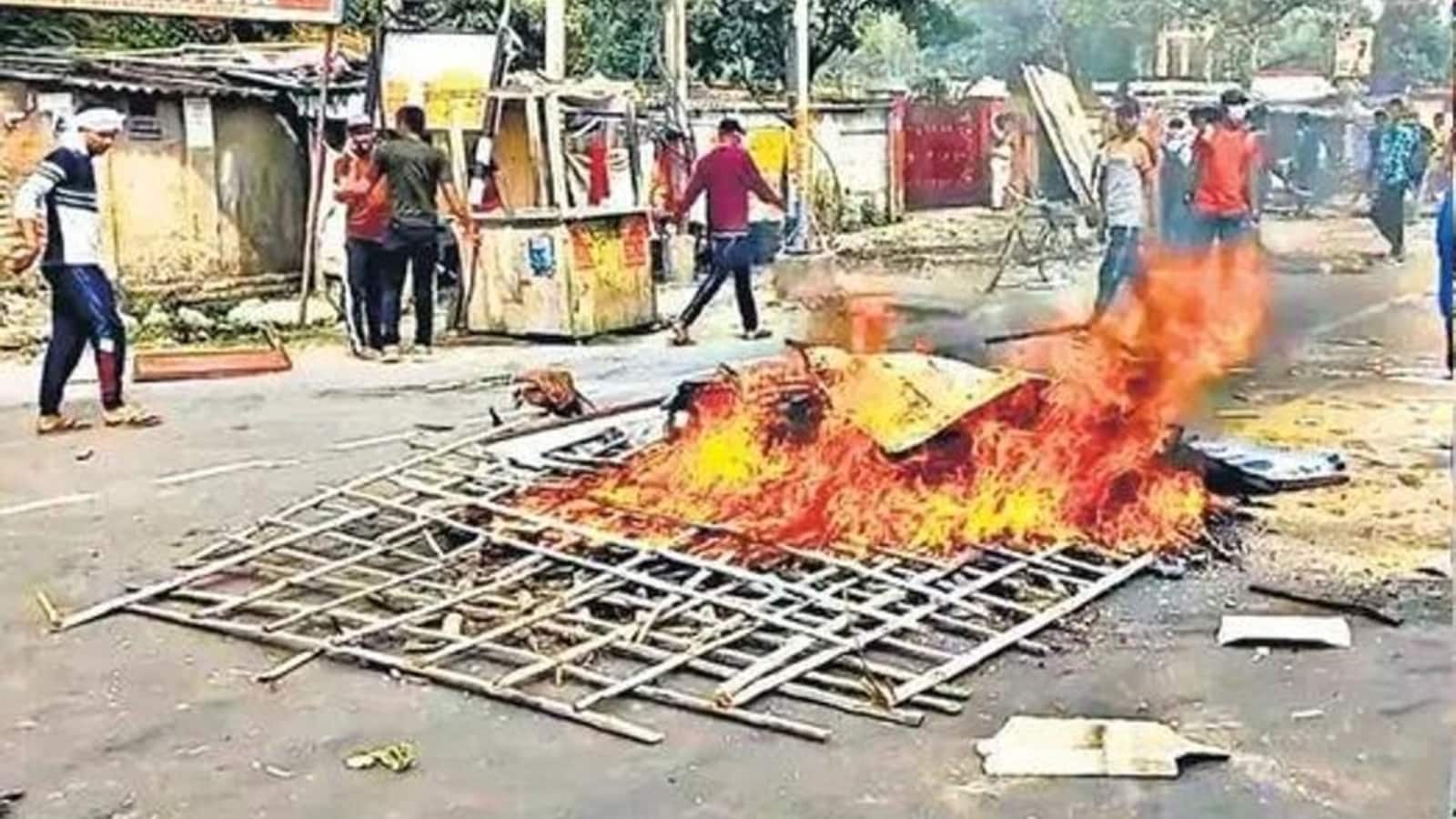 Agnipath scheme protest live updates: The protest against the scheme continued for third day on Friday with Bihar, Uttar Pradesh being the most hit states.

Agnipath scheme protest live updates: Violent protests broke out this week in several states over ‘Agnipath‘ – the centre’s controversial new armed forces recruitment scheme – as protesters clashed with security forces, torched or vandalised trains and railway stations and blocked railway tracks and highways. A police station in Uttar Pradesh’s Aligarh was also torched and the homes of senior BJP figures in Bihar, including deputy chief minister Renu Devi, were attacked. One death was reported from Secuderabad in Telangana, where too the railway station was vandalised, trains were torched and dozens were injured as police fired in the air to disperse crowds. Police in UP fired tear gas at protesters on a major highway and public buses were attacked.

Also Read | Agnipath scheme: What will Agniveers do after 4 yrs of service? Govt shares list

Protests also erupted in Haryana – where internet services were snapped – Rajasthan, Odisha, Madhya Pradesh – where another railway station was attacked and trains set on fire – and Bengal. Railways officials estimated that hundreds of trains were either cancelled, diverted or terminated before their destination due to the protests.

Overall, hundreds have been arrested across various states and a bandh has been called in Bihar. ‘Agnipath’ has been fiercely criticised by opposition leaders too. The government has defended its policy, explaining that recruits, or ‘Agniveers’, retiring after four years will be given financial aid. Also, in a nod to protesters’ concerns, the government has relaxed the upper age limit from 21 to 23.

Thank you for subscribing to our Daily News Capsule newsletter.

Here are today’s top news, analysis, and opinion at 1pm. Know all about the latest news and other news updates from Hindustan Times.


As simple as she is extraordinary: PM’s heartfelt blog for mother on her  b’day

He recalled several sacrifices made by his mother as he grew up and mentioned various qualities of his mother that shaped his mind, personality, and self-confidence.

The government on Saturday announced a 10% reservation for Agniveers in CAPF and Assam Rifles. Protests against the scheme are going on for the 4th day with AISA calling a 24-hour bandh in Bihar.

A security guard was killed and several members of the Sikh community are believed to be trapped inside the Gurdwara Karte Parwan in the Afghan capital after suspected Islamic State terrorists stormed the shrine on Saturday morning.

‘We are closely monitoring the situation and waiting for further details on the unfolding developments,’ said external affairs ministry in a statement

Two Congress leaders, part of the delegation scheduled to meet President Ram Nath Kovind on Monday, have reportedly informed their colleagues that they are not willing to do the RT-PCR test to meet the President

Union home minister Amit Shah said that the home ministry has decided to give 3 years’ age relaxation beyond the prescribed upper age limit to Agniveers for recruitment in the paramilitary forces and Assam Rifles. For the first batch, the age relaxation will be for 5 years

After months of steady fall, India is witnessing a fresh surge in daily infections, mostly fuelled by pockets of outbreak in the country’s large urban centres.

Agnipath scheme protest live updates: The protest against the scheme continued for third day on Friday with Bihar, Uttar Pradesh being the most hit states.

The first batch of Agniveers will get a relaxation of 5 years beyond the prescribed upper age limit in CAPF and Assam Rifles recruitment, the Union home ministry announced on Saturday amid countrywide protests against the Agnipath scheme.