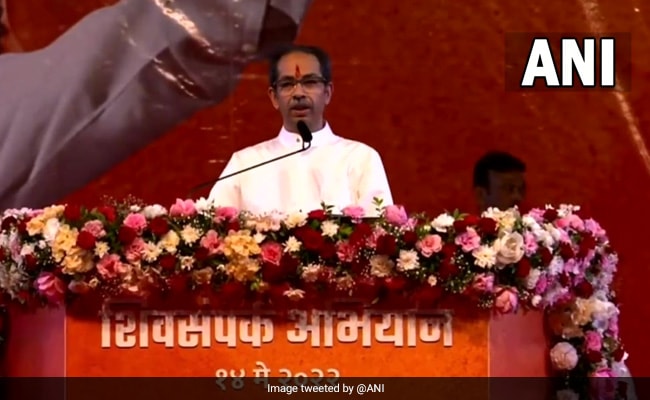 There is “a fake Hindutva party” that is misleading the country, Maharashtra Chief Minister Uddhav Thackeray on Saturday hit out at the BJP, saying the party’s Hindutva credentials have been questioned.

“There is a fake Hindutva party which is misleading the country. Devendra Fadnavis (former Maharashtra chief minister) was speaking about his Hindutva. We have fired you. He thinks he is the protector of Hindutva. What about? Who are they?” Uddhav Thackeray said at a mega rally at Bandra-Kurla Complex.

While several attempts have been made to show that the Shiv Sena has shied away from Bal Thackeray’s ideals, the party has consistently hit back saying that it is following in the footsteps of its founder Bal Thackeray.

“Your parent organization Rashtriya Swayamsevak Sangh (RSS) has never been a part of the freedom struggle. The Samyukta Maharashtra movement was created by my grandfather and aided by my father and his brother Srikant. But you know who’s out there Gaya. Bharatiya Jana Sangh” said the Chief Minister.

RSS is the ideological source of BJP.

“Rahul Bhat (Kashmiri Pandit) was killed in a government office. Extremists came and killed him. Will you read Hanuman Chalisa There?” asked the Chief Minister.

The chief minister also opposed criticism of the BJP for going with one party, the Congress, which is its ideological opposite.

The chief minister said, “They say we went with the Congress. We went openly. What about your morning swearing-in? Yes, we went with the NCP. If he was with you, you would be Nawab Malik. Like praising people.”

NCP leader and minister in Maharashtra government Nawab Malik was arrested by the Enforcement Directorate on February 23 in a money-laundering probe related to the activities of fugitive gangster Dawood Ibrahim and his associates.

Earlier speaking at the rally, Chief Minister’s son Aaditya Thackeray underlined that “Shiv Sena has Ram in its heart”. He will also visit Ayodhya in Uttar Pradesh on June 15.

“I am talking to you at the age of 31. There is unemployment and inflation, you decide which government you want. There is an attempt to create division in the society. Do you want a government that sets houses on fire or a It ensures that fire is lit in your house. We have Ram in our heart and we want you to have work in hand,” said Aditya Thackeray.