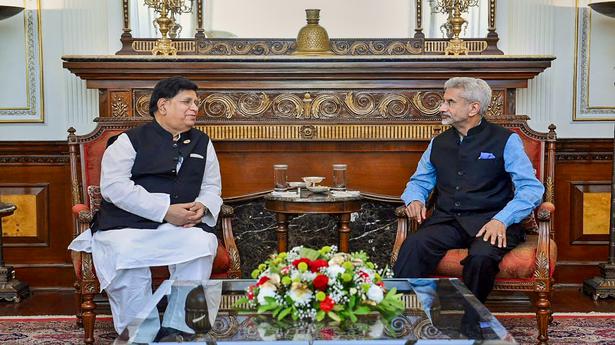 Ready to assist in the management of annual floods in neighboring country, says foreign minister

Ready to assist in the management of annual floods in neighboring country, says foreign minister

India and Bangladesh External Affairs Minister S. Jaishankar said here on Sunday that we should work together for comprehensive management of rivers. Delivering the inaugural address at the 7th Round of the India-Bangladesh Joint Consultative Commission, Mr. Jaishankar welcomed his counterpart AK Abdul Momen and expanded India’s assistance in the management of annual floods in Bangladesh, and noted that the Indian side would be able to support Bangladesh’s efforts on Artificial Intelligence. wants to work together. Start-ups, Fintech and Cyber ​​Security.

“We would also like to express our support and solidarity on the unprecedented floods in northern Bangladesh. We have in the North-East as well. We are now sharing flood management data for an extended period. I would like to take this opportunity to state that if in any concrete way, we can assist you with flood management and relief efforts, we would be very happy to be of assistance,” Mr. Jaishankar said.

The Indian minister raised the onshore dimension of bilateral ties with Bangladesh, India’s largest trading partner in South Asia, and said the two sides shared 54 rivers that required Delhi and Dhaka to work together and develop areas There was a need to share “environmental responsibility”. Like the Sundarbans.

India and Bangladesh have resolved border problems through land boundary agreement 2015 but many are negotiating the sharing of rivers that define borders and affect the lives and livelihoods of both sides. However, Bangladesh has been particularly keen to get its fair share of the waters of the Teesta, which flows through the northern part of West Bengal.

A joint statement issued after the meeting said the two teams are “focusing on the importance of the safe, speedy and permanent return of people forcibly displaced to Myanmar from Rakhine State, currently being sheltered by Bangladesh”. Bangladesh has been hosting more than a million displaced people from Rakhine, known as Rohingya, since 2017. 2022 marks the fifth year of exile for the community that Dhaka wants to bring back with “safety and dignity”.

Dr. Momen’s visit comes weeks after an international controversy when two BJP leaders made derogatory remarks on the Prophet. Bangladesh, however, has refrained from directly condemning the Organization of Islamic Cooperation (OIC) comments unlike many other countries. Officials in Dhaka previously told Hindu That Bangladesh did not want to “trigger” an issue by raising the dispute at the bilateral level.

Prime Minister Sheikh Hasina is expected to be here, but official comments did not indicate a specific date for the visit. The joint statement noted that the two ministers “asked their officials to intensify cooperation, with a focus on addressing the issues and finding sustainable solutions for the mutual benefit of both peoples.” Ms Hasina’s visit is planned as a reward for visits by Prime Minister Narendra Modi and President Ram Nath Kovind to Dhaka during 2021, when the two sides jointly celebrated the birth centenary of Bangladesh’s founder Sheikh Mujibur Rahman.