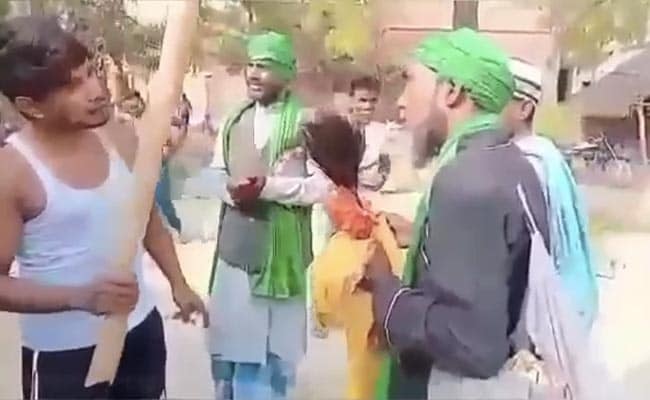 “Just show us your base, or we’ll take out your stuffing,” the mystics are told.

A video has surfaced from a village in Uttar Pradesh which shows locals abusing and harassing three Muslim fakirs (religious men) who were begging. The video has been widely circulated, amid massive international backlash over Prophet’s remarks by suspended BJP leader Nupur Sharma.

One of the criminals has been arrested, the police have said.

“They wear the clothes of sadhus but they will eat biryani with this money,” another is heard saying.

Then a youth armed with a big stick surrounded them and demanded their identity cards. Hearing that they had none, he calls them “jihadis” and “terrorists”.

“Just show us your base, or we’ll take the stuffing out of you,” he can be heard saying. He asks them their names and where do they come from and repeatedly questions why they were not taking Aadhaar. “You are all terrorists… keep your base with you at all times,” he is heard saying.

A man who tries to intervene and pacify her is pushed away.

The video comes amid heavy international backlash over derogatory remarks made by BJP national spokesperson Nupur Sharma during a televised debate on Prophet.

While around 15 Islamic countries, many of them from the Gulf, condemned the remarks, the BJP is facing opposition fire at home.

With the government describing the comments as coming from “vulgar elements”, Congress’ Rahul Gandhi tweeted pictures of news reports on the comments of prominent BJP leaders on Bangladeshi migrants and women. “Fringe is the core of BJP,” read his caption.