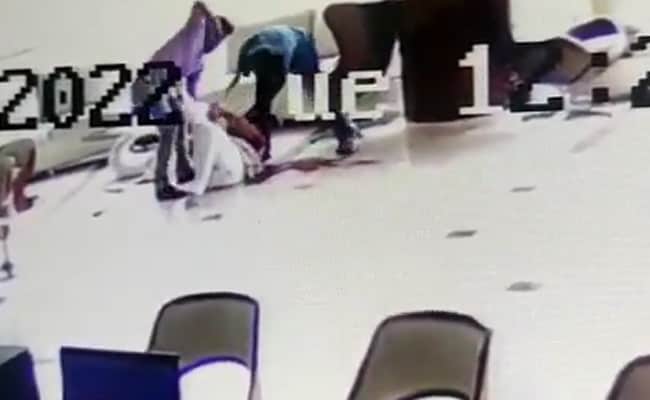 The whole action is over in a minute. The killers immediately fled from the spot with a knife in hand.

An architectural exponent from Karnataka known as Chandrashekhar Guruji was publicly stabbed to death by two men at a private hotel in Hubballi district. Police said that special teams were formed to nab the killers and now both have been arrested.

A horrifying CCTV footage of the murder shows two men waiting in the reception area for “Saral Vastu” exponent Chandrashekhar Angadi. Once he settles down on a chair, one of the men touches his feet to seek blessings, while the other begins to stab him with a knife that was concealed in a white cloth. After that both the killers stabbed his entire body with knives while he was moaning in pain and trying to defend himself.

Shocked by the sudden attack, a female receptionist flees while many onlookers take seconds to process the attack. Some hotel staff try to contact the killers to stop them, but they are threatened by the killers who stab them with knives.

The whole action is over in a minute. The killers immediately fled from the spot with a knife in hand.

Chandrashekhar Angadi lived in Bagalkot district but was on a personal visit to Hubli.