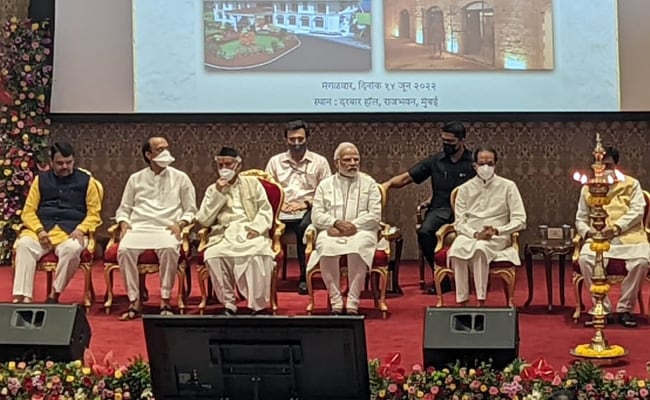 The Chief Minister received the Prime Minister at the Naval Heliport INS Shikara in Colaba.

The Prime Minister inaugurated the Jal Bhushan Bhawan and the Gallery of Revolutionaries at the Raj Bhavan.

“The inauguration of the Revolutionaries’ Gallery by PM Modi is an auspicious occasion, it is a big deal. It is our duty to keep the stories of our freedom struggle alive and it will play an important role in telling our future generations about that time. Will do it.” The gallery is a pilgrimage site containing information about those who made sacrifices for the country.”

PM Modi will next address the participants in the ‘Div Centenary Mahotsav’ (200th anniversary celebrations) of ‘Mumbai Samachar’ at Bandra Kurla Complex.

The Prime Minister and the Chief Minister will visit Bandra Kurla Complex (BKC), where they will attend another event together. Mumbai Police has issued a traffic advisory as the VIP movement is likely to affect the traffic movement in the city. After the program at BKC, a business district in the suburbs, the PM left for New Delhi.

Relations between the two leaders soured after the Shiv Sena broke away and joined hands with the Nationalist Congress Party and the Congress to form the government in Maharashtra. Since then, the Chief Minister of Maharashtra has taken a jibe at the BJP on several occasions. On 25 April this year, Uddhav Thackeray attended an event in Mumbai, where Prime Minister Modi was honored with the first Lata Mangeshkar Award. The chief minister decided to meet Chandrabhaga Shinde, 83, who had become the face of Shiv Sena’s protest against Independent MP Navneet Rana and her husband Ravi Rana in the Hanuman Chalisa controversy. The Shiv Sena later alleged that the chief minister was not invited despite sharing warm relations with the Mangeshkar family.

The Chief Minister attending the programs the Prime Minister is attending is being seen as a thaw between the two personalities and a week later after the Chief Minister’s scathing attack on the BJP, the comments made by the now suspended BJP spokesperson Nupur Sharma. has been attacked. This also comes in the backdrop of reports that the Shiv Sena is upset with the NCP over the defeat of its second candidate in the Rajya Sabha elections. However, both the parties maintain that it is a matter of protocol to welcome the Chief Minister to the Prime Minister and all is well within the Maha Vikas Aghadi government.