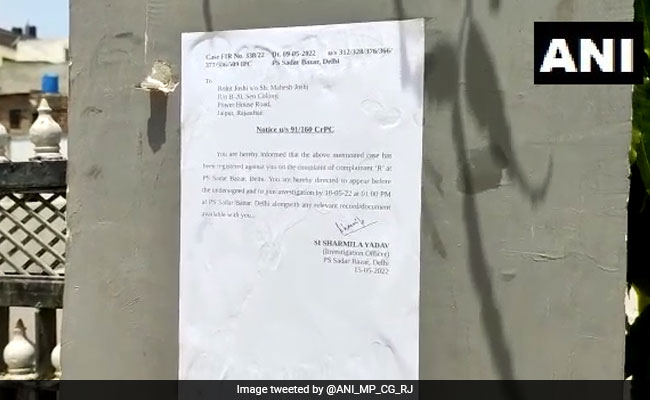 The police team visited two residences of the minister in the city. However, his son was not found. A senior police officer said, “Our team is on the lookout to trace Rohit Joshi, who is absconding.”

After this, Delhi Police summoned Rohit Joshi to appear before May 18. The officers pasted a copy of the summons on the wall of his house.

The woman alleged in her complaint that the minister’s son raped her on several occasions between January 8 last year and April 17 this year, and also promised to marry her, following which the Delhi Police initially filed a void FIR. Report or zero FIR was lodged. ,

Later, the zero FIR was converted into a regular FIR as the complaint also mentioned allegations of sexual harassment in Sadar Bazar police station jurisdiction.

The woman said that she befriended Rohit Joshi on Facebook last year and they have been in touch since then. He also accused Rohit Joshi of kidnapping and blackmailing him.

The FIR reads, “During their first meeting, he alleged, he mixed narcotics in her drink and when she woke up the next morning, he showed her nude pictures and videos, which worried her.”

The woman further said that on August 11, 2021, she learned that she was pregnant with his child and alleged that Rohit Joshi forced her to take the abortion pill, but she did not.

Responding to the allegations against his son, Mr. Joshi said, “In this case instead of speculation and media trial, the police should be allowed to do their job. I am sure the police will do justice, go deep and truth.” Will find out.”