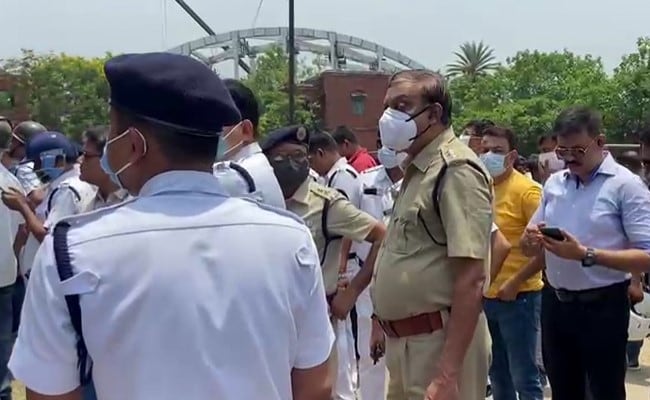 The BJP alleged that members of the ruling Trinamool Congress killed Arjun Chaurasia.

A BJP worker was found dead under mysterious circumstances in Kolkata this morning, hours before Union Home Minister Amit Shah’s visit to the city. The death has become the latest flashpoint in Bengal, where the ruling Trinamool Congress and the BJP regularly accuse each other of violence and murders.

BJP youth wing member Arjun Chaurasia was found hanging in a deserted building near his house in North Kolkata. He was to lead a bike rally later today at one of the events organized to welcome Amit Shah. The BJP alleged that he was murdered by the ruling Trinamool Congress, which vehemently denied it.

Leaders and workers of both the parties staged a protest outside Chaurasia’s house, raising tension as Amit Shah is visiting the Bengal capital for the first time since the BJP lost the state election last year.

The BJP said it was canceling all welcome programs of Amit Shah due to his death. The home minister reportedly asked his party to cancel the planned reception at the airport.

Amit Shah, who is on a two-day visit to Bengal, will visit Arjun Chaurasia’s house this afternoon.

Senior Bengal BJP leader Rahul Sinha said the man was killed on the orders of top Trinamool leaders because of Amit Shah’s visit. He said, “Our worker Arjun Chaurasia was murdered and hanged in the same Trinamool style as Home Minister Amit Shah’s programs are scheduled today. It is not only the lower level TMC leaders who are involved in this incident, but the top leadership.” Including,” he said. ,

Mamata Banerjee’s party has denied this allegation. Trinamool MP Shantanu Sen said, “The allegations against us are baseless. Let the police investigate the matter.”

Atin Ghosh, a local Trinamool MLA, said the allegations were leveled by “outsiders from the BJP”. “How can you decide what has happened before the post-mortem? Why call only Amit Shah? Call the prime minister. BJP is making baseless allegations for political gains,” Ghosh said.